“My dimensional constructions impel the spectator to reflect on reality and trigger their imagination. I momentarily control the viewer’s “mind’s eye” with illogical and mysterious illusions and exciting retinal sensations. As the spectator becomes involved with repeated viewing at different angles, my techniques and materials become obvious. I have no secrets.”

“I am foremost a colorist. The exquisite coloring from my palette elevates the viewer’s emotions to a visible smile and a feeling of well-being. Added to the colors are old-fashioned hand craftsmanship and sophisticated industrial materials to create new advances in kinetic art. My dimensional constructions will literally “move you”. 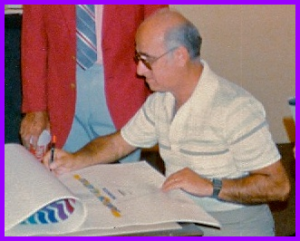 Len Janklow was born in 1919 in Brooklyn, NY into a large family.  He knew early in life that he had an artistic gift.  A scholarship to the Art Students League in NY gave him the training and skills that he needed in order to pursue his dream of becoming a full time artist.  In the meantime, however, the Depression was not a good time to begin his career.  He took numerous jobs to support himself in order to continue his evening sessions at the New School for Social Research.  After a serious but disastrous effort to support himself as an artist he succumbed to an apprenticeship in the painting of enormous ladies on huge outdoor signs.  Later, a job in an art studio was the beginning of a career in commercial art which lasted for many years.  After four years in the Army where he painted outdoor murals and drew pinups and cartoons for Army publications, he returned to commercial art and eventually became President of a very successful advertising agency in New York City.

In 1972 after a quarter of a century of involvement in the field of advertising and art he decided at age 53 to return to his pursuit of fine art.  He sold his business and moved to Fort Lauderdale, Florida where he began to make a name for himself in the field of Kinetic Fine Art.  Since that time he has gained international attention for his outstanding creations of art that provide the illusion of movement.  His creative use of acrylic, vibrant colors and remarkable design have led to many one may shows across the US.  Although well known for his unique acrylic constructions, Janklow produced only a handful of limited editions, both two and three dimensional, and the Zimmerman Editions atelier produced and published all of them.