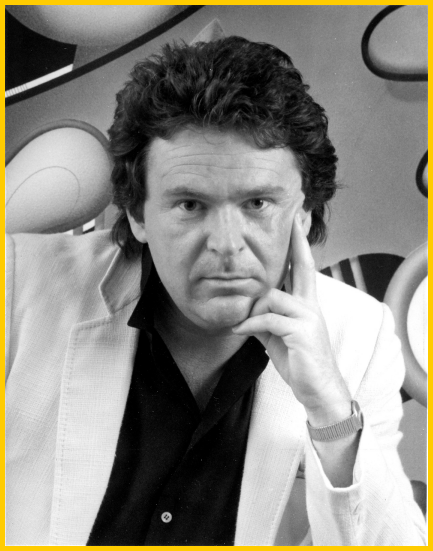 Yankel Ginzburg was born in Soviet Russia in 1945 to a Russian Orthodox mother and a Polish Jewish father. For security reasons, Yankel’s parents kept his Jewish roots a

secret to him until the age of 9. The family immigrated to Israel in 1957 where Yankel began his career in art as the youngest student ever accepted to the prestigious Institute of Art. In 1968, after graduating with honors, two years of service in the Israeli army, and several art awards and one man shows in Israel and Italy, Yankel arrived in the United States for his first U.S. solo exhibition sponsored jointly by the Israeli Ambassador to the United States, Yitzhak Rabin and First Lady, Lady Bird Johnson at The National Gallery of Art, Washington, D.C.

Since his arrival in this country, Ginzburg has had at least one important one-man show in major cities each year, spreading his art from coast-to-coast, throughout Europe, the Middle East, and the Far East. The winner of the coveted Silver Medal in the Rome Biennale, and the subject of a full-length documentary art film, numerous books, and published articles, Yankel Ginzburg has been productive in a variety of creative media-paintings in oils and acrylics, tapestries, serigraphs, and his famous quadri-dimensional acrylic serigraphic sculptures. Zimmerman Editions Ltd. was his art publisher and exclusive serigrapher during Mr. Ginzburg’s most active years of creating serigraphic limited edition sculptures and prints, from 1979-1996.

Yankel Ginzburg: A leading contemporary American painter and printmaker, Yankel Ginzburg came to New York at a young age. His first published prints date from 1970. Most of his earlier art is in the medium of lithography. By 1980, however, Yankel Ginzburg had turned almost completely to the medium of the silk-screen, finding it to be the most suitable method to shape the solid forms and colours which have characterized his art. Art scholars have termed Ginzburg’s large and impressive silk-screen prints as both ‘post cubist’ and ‘constructivist’.

Yankel Ginzburg’s art has been included in many major national and international exhibitions. He has also been featured in one man shows in both New York and Washington. Life in the Fast Lane is one of the artist’s largest and most highly respected works of original silk-screen art.

Commissioned by President Reagan to create the official poster for the Air and Space Bicentennial.

Celebrates the birth of his son, Aviel.

Commissioned to design three graphics commemorating the Bicentennial of the Constitution.

Artwork appears on cover of Study Guide to Accompany Introduction to Psychology.

Released: Celebrating the Constitution Suite honoring the 200th anniversary of the United States Constitution. Suite consists of three serigraphs: “Birth of a Nation”, “Glorious Document”, and “Celebration”, all printed by Zimmerman Editions, Ltd.

Released: Serigraphs “Tea in the Afternoon”, “Twilight in My Garden”, and “Summer Heat Wave” all three serigraphically printed at the Zimmerman atelier. 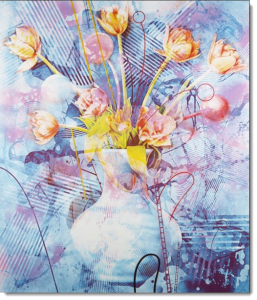 “Rhapsody In Blue”, “Summer Heat Wave” Calendar and “Tea in the Afternoon” were each printed in Baltimore, Maryland USA by Zimmerman Editions, Ltd.

Signs a formal exclusive agreement with Dyansen for worldwide representation.

Invited by director Robert Altman to play himself in the movie Tanner 88.

Invited by the Soviet Union to exhibit in Moscow. Meets with President Mikhail Gorbachev and Minister of Culture Nikolai Gobenko.

Urges the Soviets to give him an SS-20 missile for a monumental art project.

Released: “Inner Light”, and “Musical Fantasy” the first serigraphic edition to be produced, in part, on 10mm thick board, printed by Zimmerman Editions, Ltd.

Honored by Shirley MacLaine, Senator George McGovern, Lauren Bacall, Arthur Schlesinger and Ambassador Viktor Komplektov of the Soviet Union for his efforts on behalf of the people of Russia.

Commissioned to create a summit gift to be presented to Russian President Boris Yeltsin by U.S. President George Bush.

Embarks on a mission to the Soviet Union, meets with Minister Gobenko on behalf of the Lubavitch movement to secure the release of their Holy Books.

Honored by President Boris Yeltsin and the Supreme Soviet of the Russian Federation with a Humanitarian Honor Award First Class.

Released: “Shred of Moon”, and “Emerging” the tallest and largest of all sculpture editions created to date. Produced by Zimmerman Editions, Ltd., atelier.

Released: “Begin To Begin”, “Six Days”, and “Carousel” serigraphs, limited editions printed on paper with some proofs printed directly on board by Zimmerman Editions, Ltd.

Ginzburg: The Russian Collection, published by Russian Academy of Arts.

Hosted dinner in honor of Foreign Minister Andrei Kozyrev of the Russian Federation.

Presented award from Ambassador Vladimir Lukin of the Russian Federation in appreciation for his help and friendship to the people of Russia as an individual and as founder of The Fund for Democracy and Development.

Meets with President Bill Clinton and updates him on his involvement with the Russian Federation.

Invited to participate in historic peace agreement between Israel and the Palestinians. Meets Chairman Yassar Arafat of the P.L.O.

One-man show at the Landmark in Hong Kong.

His fund, The Fund for Democracy and Development, surpasses its goal providing $240 million in aid to the former Soviet Republics.

Released: The Art and Life of Yankel Ginzburg, through Vincent Lee Publishing.

Released: “Killington Gondola Butterfly” an edition of permanent vinyl and Contra Vision graphics serigraphed to beautify body and windows of a series of new cable cars (gondolas) for ski resort. Printed and fabricated by Zimmerman Editions, Ltd. and installed in Switzerland, then transported to Vermont.  See photo below of Ginzburg preparing the graphics for the Killington Gondola Butterfly at the Studios of Zimmerman Editions. 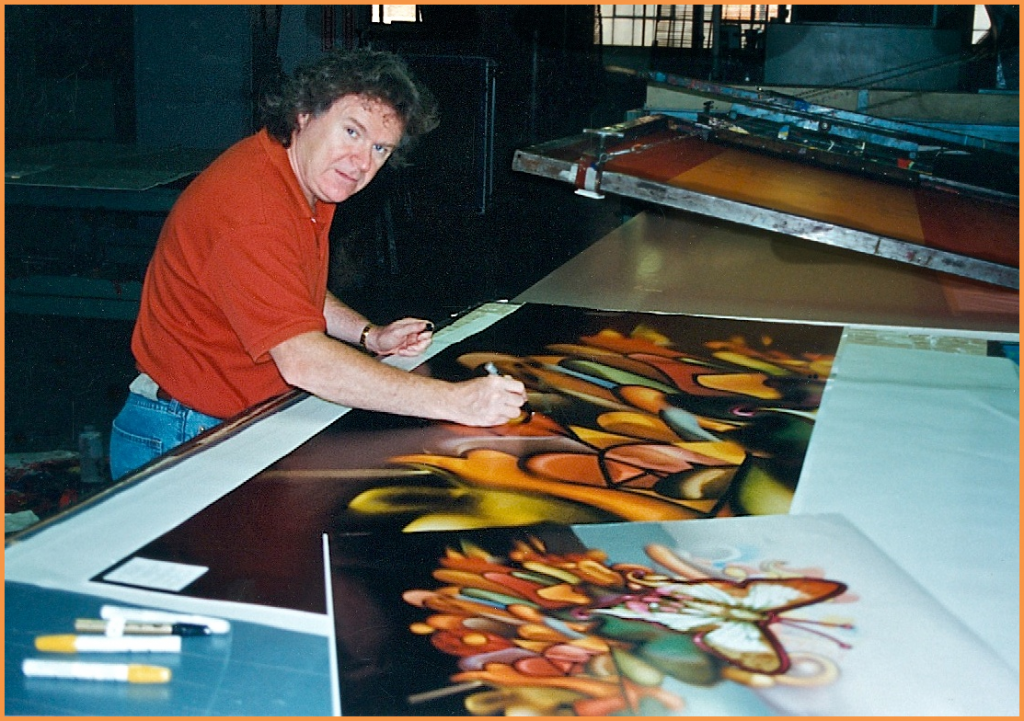 Unveiling of the Ginzburg Gondolas at the Whitney Museum, New York, NY.

Joins The International Jewish Fund for Disaster Relief (serves as the 1stVP).

Creates a series of paintings based on his impressions from Asian travels.

Introduces a new series of watercolors.

Recognized by President Bill Clinton for his contributions in Art.

Becomes a board member of The Middle East Policy Council

Commissioned by His Imperial Majesty Reza Shah II to create an objet d’art humidor capturing the majestic beauty of The Royal Peacock Throne.

Featured in book Upon Thy Doorstep by Belle Rosenbaum.

Instrumental in establishing the Mihan Foundation, a non-profit organization dedicated to creating a greater understanding between the United States and the people of Iran.

Artist’s father, Itzhak Ginzburg, passes away at the age of 80.

To commemorate his father’s death, designs a CD cover for Shabbat with Spirit, an original assemblage of religious music compiled by Cantor Arnold Saltzman.

Recognized at the Global Peace and Tolerance Lifetime Achievement Awards.

Designs the official Lifetime Achievement Awards for the United Nations.

Designs the official banner commemorating the Day of Tolerance.

Feature article in the Georgetowner.

Mentioned in the book Living the American Dream, by Henry L. Kimelman.

Won a special commendation award for his ski gondola design, which is on display at Killington, Vermont.

Created sculpture titled Celebration for the unveiling of the 2000 vintage of Oasis champagne.

Subject of documentary movie by Flike titled Ladders which was narrated by Harry Belafonte and nationally televised.